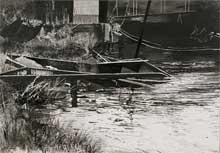 Wimbledon School of Art and The Jerwood Charitable Foundation are delighted to announce the selection panel for The Jerwood Drawing Prize 2006:

The distinguished panel of judges, who each have a specialist interest in drawing, will undertake the highly skilled task of selecting an exhibition that represents and celebrates the diversity, excellence and range of current drawing practice in the UK.

From the estimated 50-60 short-listed works to be included in the exhibition, the panel will award a first prize of £6,000, a second prize of £3,000 and two student awards of £1,000. The prizewinners will be announced at an award ceremony on the evening of 19th September 2006 at The Jerwood Space, London.

The Jerwood Drawing Prize supports and recognises the work of all artists in the field of drawing as an emerging discipline, including that of established artists and that of emerging artists engaged in the discipline of drawing.

“Drawing has often been regarded as secondary to painting or sculpture, but in recent years it has emerged as one of the most exciting and fertile areas of contemporary art practice …….new directions in drawing have been highlighted by the annual Jerwood Drawing Prize and touring exhibition, which has brought the work of many new and emerging artists to the fore.