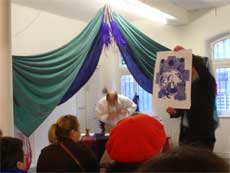 As usual I couldn’t resist joining in the bidding for a couple of items in the auction at Arena studios. It was the last one of these popular annual Christmas auctions to be held in the Duke Street studios as they have been forced to move out. They have moved to nearby Jordan Street where, hopefully, they will flourish and there will be plenty more exhibitions and auctions in the future.

Meanwhile the room was bedecked with festive stuff partly thanks to the Lotus Room shop, mulled wine and mince pies were available and the auctioneer was, as usual, the irrepressible Paul O’Keeffe.

Unfortunately several works did not meet their reserved price and had to be withdrawn but there were still many sales including the two works I came away with, one of Nick Sykes paintings and a plaster ice cream by Laurence Payot.

The Boy Stood on the Burning Deck…

Shell Wildlife Photographer of the Year 2006