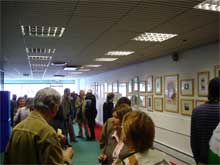 You may recall last month I went to see one of the printmaking classes run by the Bluecoat but now housed in JMU’s 68 Hope St building while the Bluecoat is being refurbished. At the time, they were busy organising this exhibtion simply called ‘Bluecoat Printmakers‘ runnig at Out of The Bluecoat in Paradise Street until Sunday April 30th 2006.

There was a good crowd at the viewing on Tuesday to see this well presented show of some twenty artists who attend the 2 classes (Tuesday mornings and Thursday evenings).

There’s is some really good stuff here and most of it is for sale at very reasonable prices. There are examples of several print making methods. I don’t have all the artists names but some that I have noted include the dark black & white pictures of Stuart Munro, other good monchromes include Frederick Jones and Irene Jones (not related), Grace Horne’s picture of Leasowe Lighthouse and the thicker lines of Mike Hatjoullis.

Well worth a look, to quote from the blurb…
Printmaking opportunities are hard to come by in Merseyside. This exhibition serves to open people’s eyes, alighting their imagination to such an important, but slightly neglected, medium.