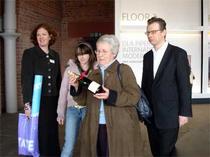 I was at Tate Liverpool at noon today to witness the greeting of their 10 millionth visitor. Of course, visitor numbers are not an exact science but those little magic eyes above the doors have been counting roughly 600,000 visitors per year since the place opened.

So, here we have Lilian Dunlop from Manchester) and her grand-daughter, Gemma Bantham (Stockport) between the Executive Director, Andrea Nixon and the Director, Christoph Grunenberg.
As well as receiving a free bag of gifts from the shop, a bottle of champagne and a free meal in the Cafe they were treated to special guided tour of the galleries with Information Assistant Bob Gallie (that’s him in the orange shirt). In 2004 Bob was winner of the Academy Ambassador Awards for Excellence in Customer Care (Arts & Culture Staff), so he was best placed to give the visitors the VIP treatment.

Speaking of this special occasion, Director Christoph Grunenberg said:
“Welcoming the ten millionth visitor is a proud moment for the Gallery. We are delighted to be providing the quality of exhibitions, and levels of service, that visitors come back to time and time again. Tate Liverpool is now confirming its position as a world-class gallery for the City of Liverpool, and with our twentieth birthday and the European Capital of Culture celebrations coming up in 2008, there’s a lot more to look forward to in the future.

Tropicalia at the Barbican