Shame it was only here for the weekend but, no doubt, we’ll be seeing more. This banner says ‘The Arabic Cultural Foundation Welcomes You’, its the work of local children and was only just finished in time for this exhibition celebrating Arabic culture.
It was a fascinating collection of all kinds of items put together by the Arabic community in the North West.
I was greeted by Muslim Chaplain, Adam Kelwick, who is Director of the Arabic Cultural Foundation which organised the event along with staff at Liverpool World Museum.
I enjoyed some Arabic coffee and big juicy dates before looking round the items in the Weston Discovery centre on the 3rd floor. Here I saw examples of traditional clothing, kitchen utensils, incense, ornaments and just a few of the medals won by the foundation’s Shotokan Karate club which has members of the GB team training for the London Olympics.

On the ground floor the maths teacher and artist Fauzia Khan was giving calligraphy demonstrations, not just Arabic lettering but also Celtic and others and drawing ones attention to the similarities. After all, the different cultures have been learning from each other, trading and co-operating for many hundreds of years. There was also an exhibition of her paintings, mostly including text in both Arabic and English, painted with watercolours, gouache and ink. Her work is very much on the themes of peace, tolerance and the positive role of Women in Islam. 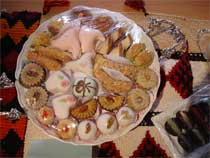 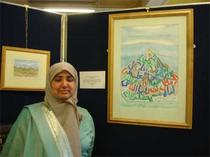 Certificate of Culture Award for artinliverpool.com