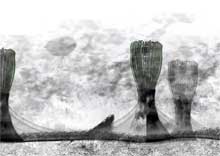 I love architecture, I think its fascinating and often beautiful and I’m not talking about the actual buildings we end up with (though some of them are great too). How can anyone fail to admire the skill and imagination that goes into these drawings by architecture students now on show at the RENEW rooms?
This is the first time the ‘Presidents Medals’ awards have been exhibited outside of London. The President’s medals attracts entries from over 100 schools of architecture around the world and the current President of RIBA, Jack Pringle was here on Friday evening to inform us, amongst other things, that the only people who hold a negative view of British architecture and architects are the British themselves. The rest of the world thinks RIBA and its members are fantastic.

He then introduced Yew Choong Chan who won a silver medal for his ‘Vertical Energy” scheme. His plan is to reintroduce marshlands into the Lea Valley area of London and build 60-storey high towers that will house pods that grow spinach. Why spinach? Because there is a guy at MIT who is pioneering the use of spinach juice to generate electricity, something to do with photosynthesis. Its all very ‘green’ of course, all architects are green nowadays if only they could find the developers willing to build their projects. So the towers include vertical gardens and little platforms for birds to stop off.
Take a look at his fantastic drawings on the Presidents Medals website.

The other medal winners are equally fascinating. Unfortunately the exhibition is a bit small so its difficult to get of full picture of all the plans but well worth a look, you may be inspired.

Saturday at the Walker

Give Art This Christmas