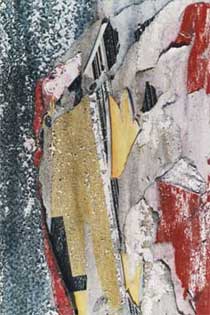 Its 18.30 and I’m heading for Ikonography. Church St. is still buzzin, I hadn’t realised so many shops were staying open on Thursday evenings. Its not Christmas is it? Maybe its in response to the new Met Qtr which is experimenting with late nights, we’ll see how long it lasts.

Ikonography is above the Beatles shop in Mathew St. in the place that used to be the Mathew St Gallery which specialised in John Lennon prints. Now its a photo studio and gallery. They like to host photographic exhibitions by local artists. So here we have ‘Shadowtime’ by Red-Dot Directors, Sue Milburn and Colin Serjent showing a range of photographs, its a retrospective of works from the past seven years.

Now, I like these because they are arty. I suppose I have to try and explain, I’m not into having an ‘is photography art’ debate. With these, I can forget that they are photos, that’s irrelevant, the camera has just been a tool that the artists have used to make beautiful pictures. You don’t even need to know what the camera was pointing at, the images are either abstracted in some way or taken so close up that you can’t be sure what they are. The result is just nice pictures, more nice black frames and reasonably priced.

So now I can relax, down a well-earned glass of wine and go to the Royal Court to watch SuperVision.

“The Cultural Sector Has Delivered”