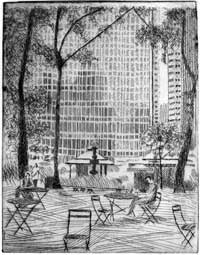 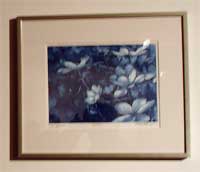 Well its been a good start to the new year so far and it continues with this exhibition of etchings by Frederick Jones and Kathrine Schou at the Egg cafe. Titled ‘Printworks’ its been curated by Katherine Doran for Headspace and opened on Wednesday evening. The cafe was rather busy for a midweek evening, maybe because it had been closed for two weeks over Christmas so lots of veggies like myself were desperate for a decent beanburger and slice of the irresistible vegan chocolate crunch, mmm.
Anyway, back to the art. Jones’ etchings are predominantly monochrome with the occasional bit of red added which throws you at first but is a nice touch I think. There’s figurative work which often focuses on the texture and shapes of the clothing and pictures of places such as Liverpool and Amsterdam show a strong concern for the underlying geometry.
Kathrine Schou was born in Oslo but has been living on the Wirral for 6 years. There is a bit more colour in her work, combining the techniques of etching and aquatint. A series of blue pictures of plantlife such as snowdrops proved very popular. My photo here of one of them doesn’t do it justice at all. Most of her work is figurative, inspired by nature.
Like I said for the Urban Coffee exhibition the other day, the show is presented as well as can be expected for a busy cafe and the two artists works complement each other nicely.

This Working Life at Renew Rooms