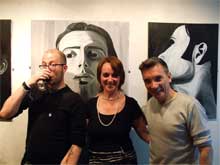 Another good day today! After spending the morning at St Georges Hall hearing about all the events planned for Liverpool’s 800th birthday in 2007 I went to see the plans for the new Design Academy which is going to be built to replace the old art school for John Moores University.

All very impressive, great studio space, gallery spaces, plenty of public access including an outdoor sculpture area. Should be ready in 2008.

Then, this evening we went to see the latest exhibition at Domino gallery by Neil Robertson, while we were there Gary Millar and Steve MacFarlane arrived to great applause. These are the guys along with Tom Lang who had just this afternoon signed the contract to keep the Parr St recording Studios and 3345 club open.
In fact Gary was telling us just some of the exciting plans they have to expand and refurbish the club, hotel etc. and to include more artwork and gallery space to the benefit of local artists. All really exciting stuff!
(Picture Neil Robertson (artist), Felicty Wren (Domino) and Steve Millar (ccuk))

Local businessmen Gary Millar, Steve Macfarlane and Tom Lang have saved Parr Street Studios from closure and uncertainty. Following months of negotiations, contracts were signed and exchanged at 4.45pm Friday afternoon. In a deal funded by Gary Millar of CCUK, Steve Macfarlane from CA Software and Barclays Bank and passionately supported by Tom Lang the complex will remain open, be expanded and be refurbished over the next 2 years.

The new owners are Parr Street Studios Limited owned by Gary as CEO with Steve and Tom as Directors.

Thanks must go out to everyone who has played a valuable supporting role. In particular, to Councillors Joe Anderson and Steve Munby, Mike Taylor CEO of BusinessLiverpool and all his colleagues, Riverside MP Louise Elman, Warren Bradley, Mike Storey, The Culture Company, friends of Parr Street and 3345, Radio Merseyside, Radio City 96.7, The Liverpool Echo and Daily Post, BBC News, Liverpool Vision, Lee Heaven at Canter Levin & Berg Solicitors, Barclays Bank and all the tenants of Parr Street Studios.

Parr Street Studios is the UK’s second largest recording studios, is a Hotel, has offices for rental to the creative community and houses the world famous 3345 Private Members Club. Big plans await its expansion and its new anchor tenants so watch this space.

Update on Arts Council support for the Independents