Thanks to Liz Lacey for this review

Norman Parkinson was the pre-eminent fashion photographer in Great Britain from the late 30s until his death in 1990.
Born in 1913, he was apprenticed to a portrait photographer.
At just twenty-one, he opened his own studio and began to work for the British edition of Harper’s Bazaar . His photographs graced many a chic and glossy magazine. His lively sense of humour, and ability to combine beautiful images of women with settings that departed from convention, set him apart from more staid fashion photographers of the time, and enabled him to capture the spirit of each successive decade.

Norman Parkinson was six foot five inches tall. He was inclined to the fashion statement in his own garb, and appeared in smoking jackets, brocade frock-coats, and famously, a Kashawari wedding hat .He experimented with his luxuriant moustache, teasing it into a variety of forms. His idiosyncratic personality and fondness for society, made him a celebrity and a darling of the London smart set . His innovative style transformed the static, posed approach to fashion photography, while he charmed his sitters and projected an alluring and glamorous public image.

Many of the greatest icons of the twentieth century, as well as some of the world’s most beautiful women, are revealed through Parkinson’s unique eye for glamour and beauty. This exhibition, though small, brings together twenty five key photographs that pay tribute to his skill as a fashion and portrait photographer. 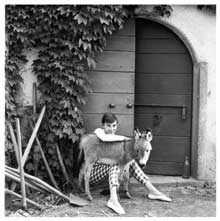 Subjects featured include Montgomery Clift, Ava Gardner, and Audrey Hepburn. He took models out of the studio and caught them on the way to work, or perched them onto the backs of ostriches and among herds of slumbering wild elephants He was amongst the first photographers to use of outdoor color photography . Many a well-travelled model today can thank him for his pioneering of exotic locations for fashion shoots.

One of his better known remarks upon his own work was “ I like to make people look as good as they think they do. And with luck, a lot better..

News from ‘Eight Days A Week’