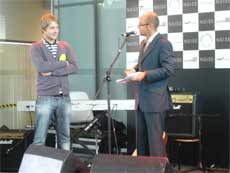 All the works were submitted online by young artists in the 16-25 age range and some 1400 works were selected from over 4000 submissions. Several big names from the creative industries were involved in the selection process including Wayne Hemingway, Peter Saville, Stella Vine, Mark Eley, Penny Martin, Nick Luscombe and Cristian Jofre.

The event was launched with speeches from Denise Proctor, Chief Exec of NOISE, Michael Eakin of Arts Council England, Peter Mearns of NWDA and Aileen McEvoy of Arts Council NW.
Then Chris Rice also spoke about his experience as one the four artists involved in the Biennial NOISE exhibition which is still on show at View Two in Mathew Street. He said he believed it opened the door to many artists who would never have even thought of being in the Liverpool Biennial.

Wayne Hemingway stressed the importance of the Joy of being creative (hear, hear!) and announced that he is employing some of the artists in the Design and Architecture category, at least on a short term basis. He even forced four of them to come up on stage.
There were some other ‘Dream Job’ announcements then we were treated to some fine music from the Manchester band ‘International One’ and rapper Raxstar from Luton.

We then made are way up to the third floor for the exhibition of some of the highlights. I would like to see a bigger exhibition of the artworks but maybe that would compromise the fact that NOISE is all about being an online showcase and platform.

Check out the website and vote for your favourite works
www.noisefestival.com

The exhibition at Urbis, Manchester runs until November 19th 2006 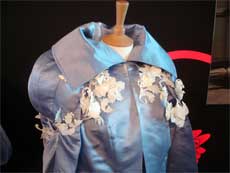 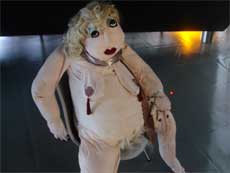 08 Shirt Gets a Red Card