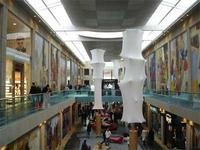 A bit disappointed with the public artworks in the Met Qtr shopping mall that opened this morning. Its ok but I thought there would be more. Overall the developers seem to have done a good job though, nice furniture. The muzak is crap naturally, didn’t actually venture into any of the shops. Maybe one day.

I do like this installation by Tobias Rehberger which has just appeared in the Liverpool Tate’s cafe. Its certainly brightened the place up. Took us a while to figure it out but it says “Together a new Liverpool” which is nice.

Tour of The Blackie