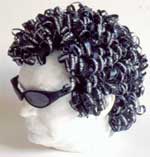 See a quirky sculpture of Brian Patten’s head, with curly lines of poetry for hair, at the main Andrew Collinge salon in Castle Street, Liverpool. You can see its arrival on the NML blog.

His hair looks fine to me but I think he needs to get out into the sunshine a bit more.

Nationally recognised sculptor Jilly Sutton made this half carved and half cast sculpture from Brian’s face, a process he did not enjoy! One of his poems, Burning Genius, forms his hair. Jilly chose this poem ‘as it had long lines – so the writing went the length of the curl’.

Another item ‘on the road’ is a Rushton Velocipede bicycle on display at the Radisson SAS Hotel, Old Hall Street, Liverpool. The Velocipede was made in Liverpool in about 1870 by John Rushton of Allerton Road, Woolton

Lowry Mersey Painting up for Auction

July Exhibition at The People’s Centre