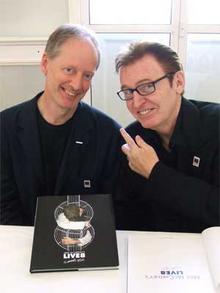 I was fortunate this morning to be able to be one of the first people to buy a signed copy of the limited edition book by Mike McCartney. The launch of ‘LIVE8 coolpix’ took place at the World Museum Liverpool today and the books should be available now from the 08 Place in Whitechapel.

The book contains a series of candid shots of performers and celebrities as they mingle in the exclusive ‘golden areas’ at the biggest music event of 2005. As a guest of his brother Sir Paul McCartney, and show organiser and founder Bob Geldof, Mike was able to gain access to areas closed to the majority of press and official photographers.

Only 1,000 special limited edition copies of LIVE8 will be published, with the profits going directly to the Live Aid Trust. The book is being published by Wirral based firm Cities500 International Publishers, who also published Mike’s earlier photographic anthology: Mike McCartney’s Liverpool Life. Cities500 are currently in negotiations with online auction site ebay with a view to auctioning copies of the book.

LIVE8 coolpix has been endorsed by both the event’s creator Bob Geldof, and Sir Paul McCartney, both of whom have written personal forewords. Sir Paul says: “Live8 was one of the greatest days of the year, possibly the decade. Bob Geldof telephoned me, explained the idea of Making Poverty History and aiming the concert at the G8 conference. I was sold. Bob’s a great salesman.

“Luckily, my brother Mike was there with his trusty camera to record the day and capture many of the exciting backstage happenings. This book is made from a selection of those pictures and he and I are proud to have been there together and to have been a part of this momentous event.”

Mike McCartney said: “LIVE8 began as a nice family day out in Hyde Park, London, but when you find yourself backstage at the Greatest Show on Earth, and bump into Brad Pitt, Madonna, George Michael, U2, Annie Lennox, Bill Gates, the Beckhams, Kofi Annan, Paris Hilton, Robbie Williams, Snoop Dog, Peter Kay, Pink Floyd, etc, it would be rude NOT to take their photo!

“It was a unique day with the bottom line of everyone trying to prevent starvation round the world. To that end, my publisher Guy and I have produced 1,000 limited edition, hard back books of the great day, with great forewords by my brother Paul and Bob (Geldof), and are donating all profits to raise money for the Band Aid Trust. If all of them sell, we will raise tens of thousands of pounds towards making African and world poverty…history. Please buy one! Thank U Very Much”

Spilsted and Anderson at Urban Coffee

Walker Artwork of the Month – August 2006