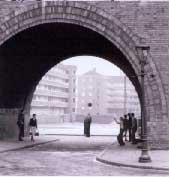 This is a large collection of black & white photographs of Liverpool taken mostly in 1969 though there are a few from the early 70’s. Artist/Photographer Peter Leeson was commissioned to record the destruction of the old Scotland Road area as it was being cleared for road construction and housing clearance.

Its not all about Scotland Road though, there’s the kids playing football, women talking on street corners, workers on the march and I like the pictures of the docks and ferries covered in a thick blanket of snow, a rare sight, winters were so much worse then apparently.

Well worth a look and all pictures are available for sale.

‘Memories of Merseyside’ by Peter Leeson at Liverpool academy of Arts until Thursday April 13th 2006
.

‘The Potting Shed’ on Walk the Plank