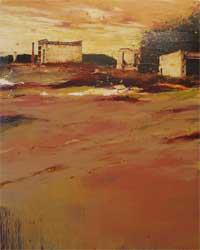 After Editions we got a taxi up to the Hope University Cornerstone building. We normally walk but it had been a long hot day.

Here is a solo exhibition by Manchester-based Margaret Cahill called ‘All the Empty Places’.
Much of the imagery relates to Eastern Europe where Margaret was part of an international residency of artists who lived and worked in Estonia for one moth making site-specific art at an abandoned Soviet airbase.

As well as using photographs taken on and around the site some of the paintings incorporate found objects such as images of soldiers and letters retrieved from the debris.

Its not immediately obvious that photographs have been used, they only form part of the pictures and Margaret uses several layers of oil paint and maybe varnish over and around the photographic images.

Tommy McHugh at Home and at MAN

Perform Your Poems on the Big Screen

Arts Fundraising Training from The Hub