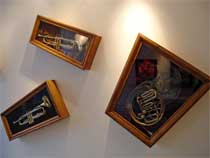 If you have any broken down old musical instruments and are wondering what to do with them you can always give them to Alex Corina. He’s been into recycling unwanted items into artworks for a while now and his latest project involves flattening things like trumpets and trombones and putting them into rather splendid odd-shaped frames to be reborn as unusual works of art.
You can see some examples at Alex’s gallery ‘Slaughterhouse73’ at 73 St Mary’s Road, Garston.
Also on the recycling theme there are several pieces of glassware from bowls and vases to jewellery made by Energywise which is a Liverpool company specialising in recycling old bottles and window glass into some very nice products.
But the most striking works on show here are a series of paintings by Chris Vine which form part of the new Artworks ‘Capital of Culture Collection’. They all have some (maybe several) references to Liverpool. There’s the Liverpool Carousel which features the Liver bird, the Yellow Submarine, Stephenson’s Rocket and many more. There’s a painting of a large Liver Bird made from Meccano which, of course, used to be manufactured in Liverpool and a ‘Trojan Lamb Banana’ referencing the Trojan Horse story.
This Artworks Print Club collection also includes Alex’s ‘Three Graces’ and more pictures will be released over the coming months.
The gallery is well worth a visit. You can also see the Capital of Culture collection at 3345 Parr St where there will be a special launch on Wednesday March 29th from 17.00 to 21.00.

Out of the Bluecoat – Pool of Sound