So now I have 3 badges to wear. My original 08 badge which is looking a bit old now, my recent 08 Ambassador badge and now this very nice 800th Birthday badge which I picked up at the media launch at St George’s Hall this morning. (the small concert room is looking good after the recent makeover, I saw a few gigs there in the ’70s)
Also this logo is free to use but you still have to get permission (oops).
So we’re all going to party like crazy during 2007 before our culture binge in 2008. Thank God I don’t need to go out to work in an office or factory every day, there’s no way I’d have the time for all this.

A mammoth party featuring one of the world’s biggest fireworks displays will be held to celebrate Liverpool’s 800th anniversary next year.

The city today (July 14) unveiled a master plan to be the world party capital in 2007 and is looking to the internet to help fuel a global celebration.

An invitation is now open to anyone with a Liverpool connection to join in the festivities and log on to www.liverpool08.com to tell the world of their plans. They can also use a special 2007 logo, launched today and free to download from the 08 website, to publicise their event.

The centrepiece of the 800th anniversary is a four-day party extravaganza over August Bank Holiday, to mark the granting of Liverpool’s first charter, by King John on August 28, in 1207.

The 800th birthday weekend will centre on six key events:

· Street Parties – communities will be offered free party kits to re-create a jubilee atmosphere
· The annual Mathew Street Music Festival (Fri-Mon, August 24-27) will focus on a retro/heritage theme and is set to attract 400,000 people

Details of almost 300 events, involving dozens of cultural and historical organisations across Merseyside, to celebrate Liverpool’s Year of Heritage were announced at the special 2007 curtain raiser in St George’s Hall. Celebrations will focus on achievements in public health, medicine and transport to the invention of Meccano and the rise of Beatlemania. 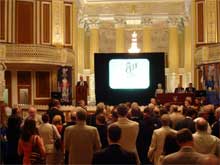 World leaders are also being invited to send their birthday wishes to the city as it prepares for a year-long programme of concerts, conferences, exhibitions, fairs, festivals, flower shows, gala openings, processions, re-enactments, talks and walks.

Today’s 2007 showcase included the premiere of a new film featuring some of the earliest footage of the city and a rare public display of the King John 1207 Charter. It also provided a preview of the stunning Small Concert Room in St George’s Hall, whose re-opening on St George’s Day after a £23m makeover, will be a highlight of 2007.

Another key theme of 2007 is the 200th anniversary of the Abolition of Slavery, with National Museums Liverpool opening a new £10m International Slavery Museum on August 23rd.

The definitive 2007 programme will be announced in September, when the first official history of the city in almost a century – entitled Liverpool 800: Culture, Character and History – will also be published.

To aid the celebrations the Liverpool Culture Company has put aside a £200,000 grants programme to help fund community projects that celebrate the Year of Heritage theme. Applications will be accepted from October.

Schools will also be getting in on the act with a day-long party across the city at the end of the school year with a commemorative souvenir being designed for pupils. Plans are also in place for a special series of Lord Mayor 800th anniversary parties throughout the year, with guests nominated by their community.

Liverpool’s Year of Heritage, co-ordinated by the Liverpool Culture Company, is supported by all five Merseyside boroughs and key national institutions such as the National Trust, English Heritage and the Civic Trust.

37 Seconds on the Big Screen – Reminder

A Day Out of Town – Parkgate

‘Partners in Crime’ at the Walker