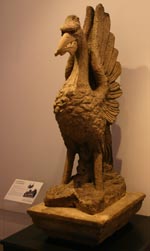 Quite an ugly beast really isn’t it? But the history of this particular bird is interesting.

This Liver Bird finial, a symbol of Liverpool, took pride of place on the very top of the original St John’s Market building in Liverpool. The building, which opened in 1822, was one of the first large scale covered markets. The ornate interior of the market was divided into five shopping avenues, corresponding to different food groups, and at night was lit by gas.

In 1964 the market was demolished as part of the redevelopment of the city centre to make way for St John’s Shopping Centre.

The Liver Bird was saved and kindly donated to National Museums Liverpool’s collections.

I wonder why it wasn’t incorporated or displayed in some way in the new St. John’s shopping centre. Maybe it should go in the Paradise Development, no, its not flash enough.

So now its ‘on the road’. i.e. in temporary accommodation at the Conservation Centre until the new Liverpool Museum is built.

Museum of Liverpool – On The Road

Fiction at Arena (Bracket THIS)