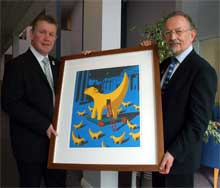 At the South Liverpool Business Leaders meeting on Thursday Garston Artist Alex Corina presented Council Leader Councillor Warren Bradley with a picture produced to Celebrate Liverpool Capital of Culture.
The print Trojan Lamb Banana by artist Chris Vine is one of twelve Chris is working on up to the Capital of Culture 2008. The first four can be seen at 33-45 Parr Street.

Alex Corina who has led the campaign for the Lamb Banana to be returned to it’s spiritual home asked Councillor Bradley when is it coming home to Garston?

Councillor Bradley responded “ I think it’s a great idea. I will go away and work on it with colleagues. We recently moved the Yellow Submarine to John Lennon airport. Garston will be the first, lets move it around the city so communities can benefit from what has become a city icon. I remember when the Lamb Banana first appeared people hated it and complained. If you tried to take it away now there would be a public outcry