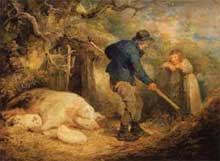 About the artwork
George Morland, whose pictures can be seen in both the Lady Lever and Walker collections,was arguably the most genuinely popular of late eighteenth-century British artists. During his brief life, according to his contemporary biographers he may have produced as many as 4000 paintings. However this and many other highly-coloured “facts” about him need to be treated
with caution.

This painting is a fine example of Morland’s characteristic rural subjects – rustic life with plump animals and contented rosy-cheeked peasants that presents an idyllic rather than accurate view of the English countryside. Pigs have had a mixed place in art – appearing as symbols of gluttony, sin or uncleanliness in religious art, or, in contrast like here, as part of a scene of rustic plenitude.