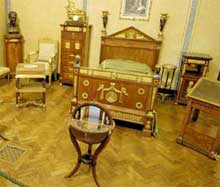 About the artwork
The Napoleon Room was originally twice the size it is today and large enough to accommodate the sprawling 22-piece acanthus-tailed griffin suite of furniture designed by Dionisio and Lorenzo Santi for the Emperor’s uncle, Cardinal Fesch, which is now to be found at the north end of the Main Hall. All the furniture and artefacts remaining in the room were bought by Lever because of their Napoleonic associations, although many of these associations have subsequently been proved spurious.
Several pieces were said to have come from the Chateau de Malmaison, home of the Empress Josephine. However, even were this so, it is unlikely that they furnished the Chateau during the Empress’s lifetime. The mismatched pair of arch-pedimented chairs against the left wall are variously believed to have belonged to Cardinal Fesch, to Napoleon’s brother, King Jerome of Westphalia, and, least likely of all, to the Emperor himself during his first exile on Elba. ….

Gallery Talk
Free gallery talks on 5, 20 & 29 July 2006 (due to limitations of space, numbers for this talk must be restricted. Tickets are available at admissions desk).

‘Funny, how thin the line is’ at FACT

“The Cultural Sector Has Delivered”

Saturday Amongst the Bohemians