Its John Peel Day today so I am listening to Radio 1 as I type this. Perhaps I should be at the gig at the Picket but we have had enough excitement for one day after driving out to the Liverpool FC Football Academy in Kirkby to watch the six-a-side John Peel Memorial Trophy tournament.
It was a great day, even the weather was kind. Kicking off at noon and going on till about 15.30 the event was organised by Phil Hayes of the Picket and Peter Hooton of The Farm.

In the final, Cream led by Mr Cream himself, James Barton, beat The Picket/Oye 5-0

Pictured above is John’s widow, Sheila Ravenscroft with ‘The Voice of Anfield’ George Sephton and the Trophy and programme.
Below is Peter Hooton (not playing due to hamstring injury) discussing tactics with the Farm team and the Ravenscroft / Stanleys eyeing up the opposition. 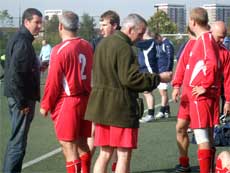 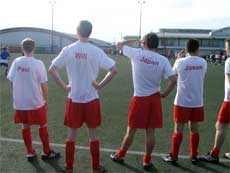