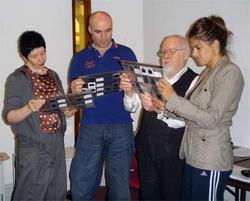 The largest number of entries for 43 years have been submitted to the John Moores 24 exhibition of contemporary painting which runs from 16 September to 26 November 2006.

The total is a stunning 2,300 entries which is the largest number since 2,403 works were submitted to John Moores 4 staged in 1963.

Of course, the judges don’t really stand around like that staring at tiny slides. They’re projected onto a large screen and although all the judges told me they are really enjoying the task it can be very tiring so several breaks are required over the 3 or 4 days it takes to whittle the number down to about 500.
They will return in June to select the final 60 or so for the exhibition and the final prizewinners.

The judges are also unanimous in their love of Liverpool and Sir Peter Blake and Tracey Emin are both working on new projects to be shown in the city during 2008.

Pictured here are Ann Bukantas, the Walker’s curator of fine art who has hardly had time for a break after opening the new Big Art for Little Artists gallery last Friday; Jason Brooks, a former John Moores prizewinner; Sir Peter Blake, a leading UK artist for many years; and Tracey Emin, a leading UK artist for fewer years.
The fifth judge, the British Council’s director of visual arts Andrea Rose was unable to attend.