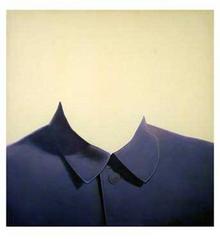 There’s some interesting work here. Mao’s Shirt, shown here, is a large canvas, another is Potus which portrays a suited man in an office and, although I’m not sure why, I assume he’s George Bush or some other US president. His head and shoulders have been replaced by a large ham complete with bone running through it.
There’s also ‘Study for Still Life with Rotten Celeriac’ and the humorous picture of jars of Marmite and Vaseline with their label information transposed. I also like the sculpture made from lead and dust.

Jai Redman graduated with a BA Hons degree in Fine Art from Reading University in 1993. He has been variously employed as a prop builder, computer games developer and exhibition designer, as well as spending nearly 10 years as an environmental direct activist and social justice campaigner.

He has spoken on the importance of art in political resistance at the ICA and curated shows of politically engaged art. Currently occupied as Creative Director at UHC (the ethical design and art project he initiated in 2002) Jai is best known for the 2003 installation ‘This Is Camp X- Ray’ – a working recreation of the U.S internment camp in Guantanamo Bay, on waste land in inner city Manchester.