Another excellent review from Mark.

Many of FACT’s previous exhibitions have been slapped with the esoteric tag, but there is nothing incomprehensible about their latest commission, ‘Howling Wolf’ by Mark Lewis. Through the use of simple filming techniques and professional actors, Lewis challenges the characteristics defining mainstream and independent cinema, building bridges between the history of art and film in the process. 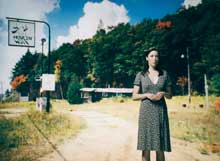 Visitors to Gallery 1 are instantly greeted by a gigantic filmed portrait of Canadian actress Molly Parker (of Six Feet Under and Deadwood fame), wearing an ambivalent expression. The piece, entitled ‘Rear Projection (Molly Parker)’ is a newly commissioned work receiving its world premier here. The actress was superimposed over a backdrop of a ramshackle gas station in Ontario, Canada, using an archaic method of filming called studio rear projection. This technique, rendered obsolete by blue screen technology, was commonly used in the 1930s and 40s to ‘transport’ stars to various exotic locations (think of the car chase scenes from Hitchcock films). Lewis selected this method to highlight the dislocation of time and space and evoke a feeling of disorientation in the viewer.

Staring at this piece for an extended period of time is certainly disorientating and it doesn’t take long for the viewer to become entranced and mirror Molly Parker. Although the landscape appears cold and empty, particularly when the sudden transition to winter occurs, there is something strangely beautiful about the scene.

Apart from the large projected portrait, the first section of Gallery 1 is utterly desolate. Perhaps this is to heighten cold feelings evoked by the work, but it does appear to be a blatant waste of space. The FACT’s largest exhibition space is vast and loaded with potential, so using only one wall in the first section is not maximising the available resources.

In the second section of Gallery 1 is another piece demonstrating studio rear projection, ‘Rear Projection (Golden Rod)’. Filmed at the same location as Molly Parker, except using different angles, Lewis attempts to disorientate us further through subtle movement and a deadpan aesthetic. The result is a work that falls somewhere between a photograph and a piece of video artwork. Lush hues of green and yellow are on display here giving ‘Golden Rod’ an entirely different feel to ‘Molly Parker’.

Adjacent to ‘Golden Rod’ is a piece Lewis filmed over on these shores. In ‘Northumberland’ a camera pans along the top of a stone wall in a typically English countryside. The image is divided into three distinct visual planes which appear to be at dissonance with one another, pulling in opposite directions like a theatre background being lugged onto a stage. As the ‘Rear Projection’ pieces, shot in Ontario, are rich in colour and vibrancy, placing ‘Northumberland’ beside them really accentuates the stark contrast between the two landscapes.

Starkly contrasting with ‘Jay’s Garden’ are two pieces shot near the artist’s London residence. ‘Lawson Estate’ is a static, uncut shot switching the viewer’s attention between two shadowy figures upon a rooftop and a man mowing a lawn in the foreground. Alongside ‘Jay’s Garden’ this image appears strikingly mundane, even when the man in the foreground abruptly stops to urinate against a wall.

‘Churchyard Row’, also filmed in London, sees Lewis’s camera rotate around a rundown street corner where the words ‘beware of the dog’ have been emblazoned on a wall. As the camera slowly turns back, genuine suspense is created only to end in irony as a harmless looking dog stares back at the camera from a distance. As with the ‘Lawson Estate’ piece, the word ‘mundane’ instantly springs to mind.

Although ‘Howlin Wolf’ is initially ensnaring – generating suspense, disorientation and wonder at times; its effect is ephemeral at best. Nothing on display here will provoke much afterthought. The layout of the work is also questionable. With so much empty space in both galleries, it can be argued that all of Lewis’s work could have been housed together in Gallery 1, leaving Gallery 2 free for other artists. For lovers of video art and portraiture, a first visit is suggested but don’t expect to be drawn back for a second look.