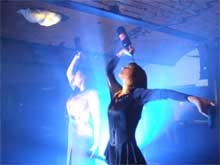 Highlight of Saturday night was the Cobra Killer performance at the BierKeller. Two women from Germany singing along to sort of techno-punk music, throwing themselves around and occasionally running into the audience. They started by pouring bottles of wine over themselves. A waste of wine but they drank plenty too.

Earlier we were busy in the Castlefield area. A Liverpool band, a.P.A.t.T. were doing a set on a canal boat, we just watched while they rehearsed on the canal bank before the boat arrived. It was too hot to face an hour long trip on the canal in an overcrowded barge.

Meanwhile Wrong Music were performing some crazy karaoke thing outside the museum which was hilarious and inside we enjoyed Pete Hindle‘s talk and demonstration of his Duelling Etch-A-Sketches which he adapted to make really bad techno music. 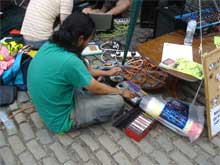