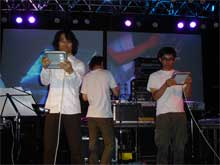 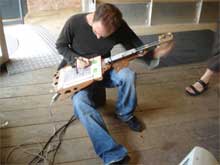 Apologies for the lack of updates the past couple of days but we are in Manchester for this years Futuresonic festival. Yes, of course, I checked that the hotel had wi-fi access before I booked but I assumed it was free and its been a struggle finding free access here. So, eventually we settled here in the cafe at Cornerhouse and trying to catch up.

Anyway, I’m in techie music heaven here. The festival got off to a great start with a talk by the Japanese artist-musician Toshio Iwai introduced by Eddie Berg the former Director of FACT. At the end of the talk Toshio gave a short demo of his new instrument the ‘Tenori-on’ (= sound on your palm) developed with the Yamaha corporation and hopefully on the market sometime in the future. You can see it in the picture above.

On Friday night at Academy2 Toshio and his collaborators gave a full performance using the Tenori-on and some of his other musical inventions, it was excellent.

Most of the action is taking place at the Museum of Science & Industry in Castlefield with smaller events in the Northern Quarter and various bars round the city. There’s even art in a barge on the canal and in a big blue container. Another mobile work is the Speech Guitar played by Jon Cambuel, it looks a bit like a guitar but is played with a stylus on a graphics tablet rather than plucking strings.

On Friday afternoon we watched an interesting ‘Hypercomposition’ performance of by Vergil Sharkya using various traditional instruments together with new technology to create a 3-D sonic space of warped frequencies and grooves. Vergil is a visiting fellow at JMU Fine Arts which has post-graduate sonic arts courses.

On Friday night after the Academy2 we went to the basement of the Rossetti hotel to see some of the Concert over Broadband put on by realfresh.tv. A couple of good sets by The Black Paths and a new group called The Search Map.

No more time for blogging, lots to see. More to follow.. 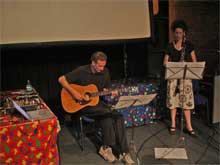 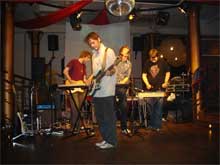 A Gallery Closes – A Gallery Opens

Football Art Prize at The Lowry