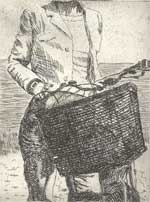 Good to see Liverpool artist Frederick Jones is doing very well. He has sent us an update…

A year after starting to exhibit, I’ve shown etchings in London, Canada, and Bulgaria, at the Royal Birmingham Society Artists. I now have an entry in the forthcoming and prestigious annual exhibition of the New English Art Club at the Mall Galleries (between Buckingham Palace and Trafalgar Square).

The NEAC started as a rival to the Royal Academy and has been in existence for over 100 years. Past members include Sickert, Whistler, and Sargent, and many current NEAC members are also members of the RA.

The show opens on the 1st of December (runs to 18th Dec), and most of it will be available online at the NEAC website.