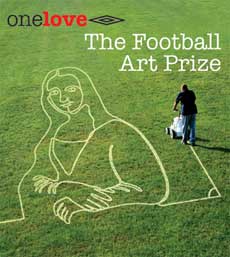 In 1953, the Football Association ran a competition aiming to show the opportunities that football can offer the artist. First prize went to LS Lowry, for his painting Going to the Match, which now hangs in The Lowry, courtesy of the Professional Footballers Association.

For World Cup year, the Lowry have re-staged the 1953 competition, inviting artists of today to submit their interpretation of the beautiful game, with big prizes for the winners.

On Thursday 30 November, the winners were announced and prizes handed out by football star Michael Owen.

Most of the works in the show are for sale.