On a large screen in Gallery1 at FACT is a video of a man wearing a helmet spinning round whilst suspended from the ceiling. Except he isn’t really hanging from the ceiling that would be impossible or at least very painful. The image has been inverted and is in slow motion. Doesn’t sound very exciting I suppose but I sat there for quite a while watching it and marvelling at how the human body works. This work is called Pataphysical Man by Shaun Gladwell, the title refers to the science of the absurd as defined by Alfred Jerry.

The other reason I was happy to stay and watch for a while was because I was seated on Zizi the Affectionate Couch (Stephen Barrass, Linda Davy & Kerry Richens) a strange shaped furry sofa that reacts to people sitting on it and stroking it. It vibrates and purrs, quite a pleasing experience, I wonder where I can buy one for the home.

Another work in Gallery1 is Expecting (Van Somerwine, Isobel Knowles & Liam Fennessy) an interactive installation. By squeezing a small teddy bear you can cause the animated girl to give birth to a small child which she then serves tea to and then play and fight together. Very clever and slightly disturbing.

Also in Gallery1 is Cross-Reference (Craig Walsh) which is a film of people walking in a street past a hidden camera, every so often one of the pedestrians will stop and peer into the camera. Because its a large scale picture the viewer feels a bit small and insecure.

The Shy Picture (Narinda Reeders & David McLeod) is sort of the opposite to Cross-Reference as this time the people in the video are seemingly frightened off by us, the viewers. Its a very clever use of motion-sensing software. As the viewers approach the screen the family in the film run away and hide and only return once the viewer has moved away again.

Finally in Train No 8 Daniel Crooks uses his signature ‘timeslice’ technique to alter the look and shape of a train ride through London.

In Gallery2, I had great fun smashing up lots of objects. Only virtually though. Op Shop (the Australian name for a junk shop) by Stephen Barrass is another interactive installation. You talk, sing, scream or whatever into a microphone. The noises make the objects on the screen vibrate and eventually explode if you make the right noises.

House II (David Haines & Joyce Hinterding) is more video trickery. A large solid house in Pennsylvania has a fast-flowing stream of water pouring from its ground floor doors and windows and down the street. That’s all it does though so don’t sit there for ages waiting for something else to happen.

I think my favourite thing in the show is Dislocation by Alex Davies. A maximum of 4 people are allowed into the room at a time. You can each look into the 4 small monitors in holes in the wall and you can see yourselves filmed from behind on the screen. Then as you watch, other (pre-recorded) images are superimposed. It looks so real, there are people walking in and out talking, a dog comes in and barks wildly, you can hear it and see it on the screen but when you look round there’s nothing there! Amazing.

In the Media Lounge is probably the most popular work. Virsual (Steven Mieselewicz, Nimrod Weis & Asaf Weis (ENESS)) is a typical 3D landscape computer game but it is controlled by the person ‘riding’ a small yellow rocking horse and turning its head from side to side. So the player feels much more part of the virtual landscape than they would just using a mouse or joystick.

The other work in the Media Lounge was Panopticon (Tan Teck Weng) which is a small black box with a camera and tiny furniture inside. You would tip the box in all directions and see the furniture fly around the room. I really enjoyed that but sadly, it broke after a few weeks of heavy use and has been replaced by an amusing slow-motion video work. Its similar to Bill Viola’s works but these are films of people being splatted with various liquids. (Marcus Lyall: Slow Service – See Marta’s comment below for the full explanation)

Experimenta Media Arts is Australia’s leading contemporary arts organisation dedicated to commissioning, exhibiting and promoting media art in a way that is engaging and accessible. Since its inception in 1986, Experimenta has developed a worldwide reputation for fostering creativity that extends the aesthetic and conceptual potential of new art forms, and its exhibitions have been the launching pad for many Australian contemporary artists.

Overall, one of the best FACT shows so far. Or at least, one of the most entertaining. We have to have the dry, serious stuff too I suppose but, hey, its summer and we have to amuse the kids. I have been round it a few times and will miss it when it finshes on Monday. 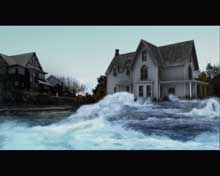 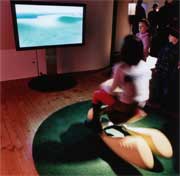