I adore the opportunity to go and view other artist’s work and it is refreshing to take time out as an artist from my own. The chance to peruse different art forms, from the genres and canons heralded in the museums and art galleries where I escape for reflection in my own art. All the way through to the more contemporary art practices, which touch on the conventional and expand to more current technological artistic explorations. One of my passions being performance art and significantly thought provoking and insightful.

On Saturday 11 March 2006, I went to Museum Man, an gallery on the top floor of a Georgian house in Rodney Street, Liverpool. Advertised was the work of a performance artist/poet, Ernesto Sarezale, titled ‘One rite and the concrete Poem’. I had read earlier on the website for the gallery (www.museumman.org) that: 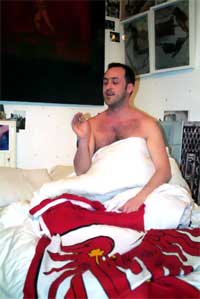 The fundamentals of his work further outlined as:

‘Ernesto’s work usually deals with the “queer body”. In an attempt to fathom the paradoxes and complexities of sexual intimacy, his poetry, video and performance survey the pleasures, the pains, the metamorphoses inflicted on the flesh by sexual desire. He often chooses to incorporate his own body, exposed and vulnerable, as an integral part of his live acts.’

I remember having a discussion with an artist some days prior and who adamant stated performance artists are all self indulgent and only make art literally of and for the self. This had stuck in my mind and although as a performance artist myself I strongly disagreed with this commentary and assertion. Yet reading through the text above I wondered maybe indeed there is an element of this and such could be construed in my own work.

The night came and I was in the gallery with a group of others. We got ushered into the main communal area where the performance was staged and took our seats arranged along one side of the room. He, Ernesto Sarezale, commenced.

He was lying in the bed on the far corner of the room, covered with the duvet. He started to orate his poetry. His voice with a slight, but distinct Spanish accent. It was soft and captivating and as he spoke his verse, he gestured tenderly and intermittently with his hands. He then stood from the bed, exposed, bare flesh of a man, yet the tender timbre in his voice and profound verse hypnotised the audience the nakedness society would normally shun becomes one innate. The words explications of his own experiences, yet within a certain satire a reality of emotions we can all relate to. He walked across the room, still quoting his rhyme and then at the finale invited all the audience members to write their own prose or text on his body.

This performance was exceptional and enlightening. Provocative, yet consensual, to all whom observed and experienced the shared encounters and memories of Sarezale inscribed and orated in his poetry. If you have the opportunity to see the work of Sarezale I strongly recommend it! A beautiful, yet strong and germane performance. The captivation of Sarezale, although within the context of his own experiences, imbues a universality by the interaction and cognition he captures in his work.