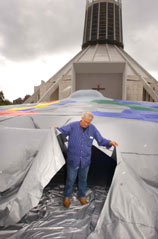 What can I say, its all so depressing. I went to the opening on Friday and really enjoyed it, I was about to write about it and urge people to visit. Now I’ll wait to see if/when its repaired.

A KNIFE-wielding gang has trashed a prestigious art exhibition in the grounds of Liverpool’s Roman Catholic cathedral.
The yobs destroyed the Dreamspace project within hours of it being opened.
Up to 15 youths climbed the steps to the Metropolitan cathedral plaza and broke through hoardings.
A security guard tried to stop them but was threatened by the armed mob who then went on the rampage.
They ripped up the massive air-filled dome causing damage which will cost thousands of pounds to re-pair.

Organisers are facing a race against time to repair the dome and are predicting it will reopen on Wednesday.

Mr Agis said: “A lot of blood, sweat and tears has gone into the project so it’s galling to see it ruined just 24 hours after opening.
“It’s shattered me as this was the biggest exhibition I’ve done and it’s being premiered here in Liverpool.”

Val and Doug Robinson at Editions

Christian Furr Interview in the Echo