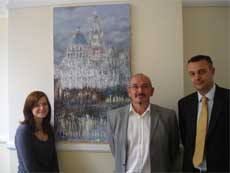 Liverpool artist, Garry Lawlan who also has a page in our artists directory, has been the the first to benefit form a new scheme set up by Dot Art.
He is pictured here in between Lucy Byrne (Dot-Art) and David Hunt (Director at Alexander James Executive Search)

Headhunting firm Alexander James Executive Search on Wednesday Sep 27 unveiled an oil painting of the city’s famous skyline, by Liverpool artist Garry Lawlan, after responding to a call for a new wave of business patronage of the arts.

The appeal was made on the website of the Liverpool Culture Company’s free to join 08 businessconnect forum, after its manager Nichola Lee heard a talk on the city’s two great Victorian patrons James Barclay Walker and Henry Tate.

The advert was made by 08 businessconnect member dot-art – an art gallery and consultancy which represents more than 80 Liverpool artists – inviting businesses to sponsor a local artist.

The appeal has already been hailed a success with a second sponsorship deal completed and several more in the pipeline.
David Hunt, Director at Alexander James Executive Search, said as well as buying the new work the company is also promoting Gary’s work in their external communications and will be showcasing his work at network events next year.

David added: ”We’re a relatively recently formed company and wanted to have a unique flavour to our new offices. The 08 advert was perfect timing. Garry’s work is outstanding and as well as brightening up the office, we’re proud to be able to give a local artist a lift up in their career. We now have two of Garry’s pieces in the office, both depicting the cities Iconic waterfront, and they have made a big impression on visitors to our office, as well as making the office a better working environment for us. ”

‘Elemental’ at Liverpool Academy of Arts