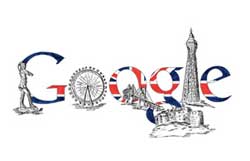 Being a fan of Google I’ve been following the progress of this competition through the year.
The winning doodle 4 google image is now showing on the google.co.uk page and the full details of the prizewinners are on the doodle4google page.

‘Doodle 4 Google – My Britain’ is a nationwide design competition which was open to the UK’s 10 million school children. Young people were invited to design a Google doodle representing what it means to them to be British today. These are the winning doodles in the 2006 competition.