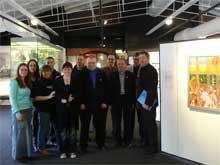 ‘Dare to Dream’ An Independent Poem Art Exhibition’ is on the 4th Floor of Maritime Museum until May 21st 2006.
A very nice little exhibition this which acts as a nice break from all the maritime related stuff on show in the rest of the museum. Poetry and visual art are often mixed together (which is good because I like both) and this exhibition was originally designed for the 2006 Poetry in the City festival which starts on April 25th but now exists perfectly well in its own right and may well go on tour to Liverpool’s twinned cities over the next couple of years.

The 14 artists are all past or present staff of National Museums Liverpool and were invited by Liverpool Front House to create individual artworks inspired or responding to poetry. Some have even written their own poems.

Liverpool Front House is a community based arts project designed to promote the creative talents of the city centre’s working community. The idea is to get several (all!) workplaces displaying artworks created by their own staff. If you are interested in this scheme, contact Paul Miller by email at liverpoolfh@merseymail.com

Hive in the Box

Victory for LFC and a new-look Blog