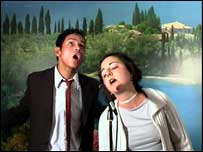 I forgot to mention in Part 1 that the heating wasn’t working in my hotel room. I reported it to reception on my way out to the launch. On my return at midnight I found a fan heater in the middle of the room on max. heat and full blast! So rather than being freezing cold it took hours for the room to cool down to a bearable level.

Thanks to the person from Urbis for explaining that the after-show party RSVP thing wasn’t a cock-up after all.

So, out early on Saturday morning for the long walk down Oxford Road to visit the Whitworth Art Gallery. Here we have the soapy foam sculptures by Roger Hiorns which collapse under their own weight every so often. Several other works including some good videos, Breda Beban’s ‘Walk of the Three Chairs’ is nice and 2 short pieces by Liverpool’s Paul Rooney are really good. The two are similar, ‘Lights Go On, The song of the nightclub cloakroom attendant’ is just that. We hear the attendant singing about the job as we see shots of the club after a busy night. Then ‘The Song of the Gallery Assistant’ was filmed at Liverpool Tate, I think Rooney worked as an assistant there himself some years ago.

The walk back into town isn’t so bad as The Eighth Day veggie cafe is on the way, delicious vegan chocolate and orange cake, yum.

Castlefield Gallery next but was unable to see anything as the place had been taken over and the videos turned off for the artist’s talk. That was a shame but hopefully I will be back before the exhibitions finish on April 2nd.
The International 3 is a place I have not been to before, there’s just the one room with videos and props by Juneau/projects/. The seem to like to perform in dark woods, filming themselves putting lengths of wood into an amplified shredder or dangling live microphones into a bonfire until they melt and scanning the ground by actually dragging a scanner connected to a laptop across the grass. Very interesting.

Finally the Manchester Art Gallery. Normally, I pay very little attention to video works in Art Galleries but having seen a few good ones already today, I suppose I’d got more into it and then the Phil Collins’ ‘el mundo no escuchara’ (The World Won’t Listen) is just so compelling. There was quite a crowd in there just watching the whole 80 minutes or so. Actually its one those things were people could say ‘but is it art?’ because its just a series of people performing Karaoke to songs by the Smiths. It was filmed in Bogota, Columbia and the singers are obviously huge fans of the Smiths but in some cases look like they don’t understand the lyrics even though they perform them as well as Morrissey himself. Appropriate that this should be shown in the bands home town of Manchester.
Also in the Art Gallery are some wonderful large colourful sculptured heads made of all kinds of mixed media including plastic lizards, guns and swords by Hew Locke. A beach installation with real sand that you can walk into as long as you wipe your feet on the coconut matting afterwards by Siobhan Hapaska.

Of course, there’s loads of stuff I haven’t mentioned, some of its a bit dull (yeh, those documentary style videos/photographs again) but most of it I really enjoyed.
You have to go, its a major show, its only just down the road, its in 7 venues and its all free.

Get Arty – and Paint A Pot

FACT Director to Leave in September