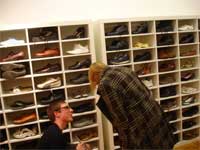 So, knowing that I would be in Manchester for 3 days for the the British Art Show, I booked into a hotel with wi-fi access and took my laptop. It turned out that the internet was only available from the lounge which was dark, smokey and noisy. Then the very first time I logged on my glasses broke (why does that always happen when you’re away from home?) so I couldn’t see the screen. Hence no blogging or email for 3 whole days, aghhhh!

Still, it was a great weekend. The British Art Show only happens once every 5 years and this is the 6th one so its been around a while and is highly regarded as a guide to the most significant art being made in Britain. 25 of the 50 artists or groups on show are not actually British-born, this is about art made in Britain or by British artists abroad. It is a Hayward Gallery touring exhibition having just arrived here after a few months in the Baltic gallery in Gateshead.

It is spread across 8 venues which is why a weekend visit was required, the launch was on Friday evening but circumstances dictated that I was up at 6am to visit Blackburn first (more about that in a later post) so I was already a bit worn out. Starting at the Cornerhouse, visitors are invited to swap footwear with some that had been donated by local people. You can wear these alien shoes as you go round the venues and return to reclaim your own shoes later (Adam Chodzko, M-Path). Also here is the wonderfully clever carpet sculptures by Tonico Lemos Auad.

Up to the Northern Qtr at the Chinese Arts Centre is a 9ft tall hand-stitched rag doll slumped on the floor in an art-deco setting. This is one of the series of Alter Ego dolls by Enrico David.

Next was Urbis but it was already nearly closing time so just a brief look around the more architectural pieces here by the likes of Matthew Houlding, Nathan Coley and Toby Paterson.

There was a bit of a cock-up on the organisational front later at Urbis, the after-show party was full to capacity with a big queue of would-be party-people waiting outside. So someone came up with idea of only allowing in people who had RSVP’d. It does mention rsvp in the small-print on the tickets but hardly anybody actually did of course. I get the impression that Urbis is not the most loved place in the local art-scene so this was just more fuel for the fire. Lots of joking about all future visits there will be preceded by several emails informing of the visit and RSVPing ad nauseam. I did manage to get in later on but wasn’t much happening anyway, so back to the hotel and ready for the remaining venues on Saturday.