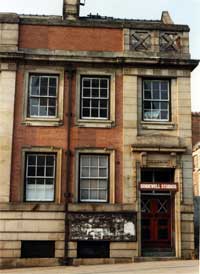 Built in 1846 as a police station, the large red bricked building is situated on the corner of a busy thoroughfare on the eastern edge of Liverpool’s city centre and opposite the Royal University Hospital. There is evidence of its original function still visible: a sign,’Detective Office’ at the foot of a staircase and the row of cells.

The derelict building was taken over in 1976 by a group of artists. In 1981 a non-profit distributing company named Artspace Merseyside Ltd was formed to run the studios. The premises were then purchased by the artists after the demise of Merseyside County Council.

Over the last 30 years ‘The Bridewell’ has been the base for hundreds of local, national and international artists including, amongst others; Maurice Cockrill, Adrian Henri, Ian McKeever and Anish Kapoor. It has also had as a tenant David Gray, recording artist and been a location for Alan Bleasdales ‘Boys from the Blackstuff’.

There are currently 37 artists banged up in its spaces: painters, sculptors, printmakers, fashion designers, furniture makers, ceramicists, stained glass and textile artists, photographers and multi-media artists.
The studios are still owned and run by the artists and operates without public subsidy or grant-aid of any kind.

The building itself is full of character and has proved to be an ideal site for studios, however with all buildings of a similar age, life is a constant battle against entropy and the elements. Despite this, the studios continue to
thrive and the members are positive about the future.

‘Objects of Desire’ at Lady Lever