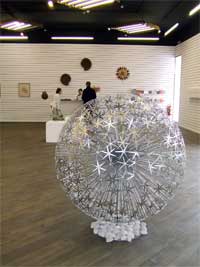 The new Bluecoat Display Centre Two is brilliant. We called in there today and were amazed at the great job the staff had done in a short time.

Its the former Black’s Outdoor Store in Hanover Street, so where there used to be tents, rucksacks and other useless stuff there is now some beautiful sculptures, ceramics, jewellery, paintings etc.

Its a shame its only there until Spring 2007 when the premises will be demolished as part of the Paradise Development.
Meanwhile the original Display Centre is still accessible (just about) from College Lane just opposite.

Remember the Other T Shirt Competition