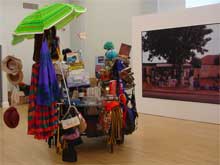 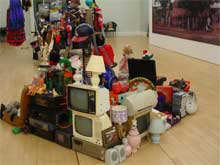 If you have seen previous exhibitions curated by Jump Ship Rat then I’m sure you will instantly recognise this as their type of thing. That’s not to say its predictable or boring. On the contrary, I found it interesting and fun (my favourite element).
The World Museum is a bit odd though, its a huge place and there are plenty of signs and maps but they only direct you to the permanent sections such as the Aquarium or the Planetarium. If you didn’t know about this exhibition in the Horseshoe gallery on the second floor you would almost certainly miss it.

Here’s some of the blurb…

The hypothetical fourteenth article in many African constitutions is proverbially said to be débrouille-toi, toi-même; in other words ‘you have to look after yourself, because no-one else will’. In the case of Benin, this is a reference to how government officials are parasitic, taking the state budget for personal means, in which the symbiosis between state and citizen leaves many to fight for their own survival. The exhibition explores the socio-economic issues affecting West African societies, and more specifically the individual life of the street trader who must continually reinvent survival strategies and negotiate ever-changing urban territories. The localised trade of globalised products is central to Hazoumé’s work, which contextualises the historical trade between Africa and Europe amid the harsh political and social realities of contemporary capitalist exchange.

A deep sense of history is present in much of Hazoumé’s work, and he addresses the sophisticated, pervasive exploitation of human labour that marks modern forms of slavery. This exhibition highlights how the complexity of both a colonial history and globalisation has affected contemporary African society, exploring both the local history of Hazoumé’s hometown of Porto-Novo and its relation to the maritime history of Liverpool.

The use of reclaimed objects in his installations is not about recycling in the western sense of tackling environmental issues, Romuald explains; “materials tell us a lot about the life of people – it is a way of connecting with their lives – every thing we use says something about us, whether it is the plastic bottle from which we have drunk, the wrappers of the things we consume, the butt of a smoked cigarette; all the things we reject and throw away are still part of us, part of our lives in a way. It is in these materials that we can read about the lives of people…It is like a kind of modern-day archaeology. I make work about life in Africa; about how people cope with everyday hardship and danger, sometimes with humour and style, and sometimes with great difficulty”.

Romuald Hazoumé was born in 1962 in Porto-Novo, in the Republic of Benin on the coast of West Africa, and now lives in Cotonou and works in Porto-Novo. Hazoumé’s work has received widespread acclaim and has featured in numerous international exhibitions, from Saatchi Gallery’s ‘Out of Africa’ to, the Menil Collection in Texas, Africa 05 at the October Gallery, London and ‘Africa Remix’ at the Hayward Gallery, London, Centre Pompidou, Paris and the Mori Art Museum Tokyo.