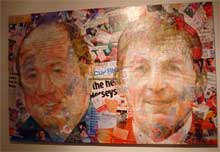 On Wednesday night I went to the Hanover gallery on the corner of Manesty’s Lane for the preview of Anthony Brown‘s portraits of 100 people before it goes on tour around major North West venues.
He is still working on several of the pictures but there were a lot of completed ones on show. The subjects are all chosen by the artist for their unique contribution to Liverpool life, their individual strength and spirit and their involvement within the life of the artist, his wife and business partner Lorraine and their work.
Portraits so far include names such as John Lennon, Mike McCartney, Dean Sullivan, Pauline Daniels, Dave Charters, Jason Harborow, Howard Kendall, Kenny Dalgleish.

Quite a few of the subjects were there, it was the first time I’d met Jason Harborow and straight away insulted him by associating him with the wrong rugby team. He was ok about it though, he’s a big fan of artinliverpool.com so I’ll be more careful in future.

The portraits will be a multi layered process of news print (mainly Liverpool’s own The Liverpool Daily Post and the Liverpool Echo), magazine, book, written word & pictures and photograph, all becoming medium alongside traditional oil and acrylic paints and technique which build a uniquely personal portrait of the sitter – a ‘diary’ of their life & image.

Anthony is looking for sponsors, if you are interested in the project, he’ll be glad to show you what’s going on in the Hanover gallery. email 100heads@emso.co.uk

Walker Artwork of the Month – February 2006