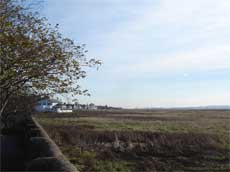 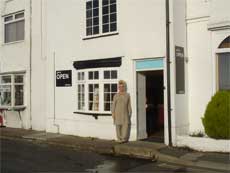 Time goes by so fast, its almost two weeks since we had a lovely day out in Parkgate on the Wirral.
It was a nice bright Autumn day and Parkgate is a quiet picturesque village overlooking the marshlands of the Dee estuary. Its famous now for its birdwatching and ice-cream and historically as a small port where Nelson’s mistress, Emma Hamilton stayed, as did Handel whilst waiting to sail to Dublin.
At the weekends its packed with twitchers and walkers and, hopefully, some of these will be interested in art and take a look at the new gallery called the Artroom which is on the Parade next door to the popular Marsh Cat Restaurant.

Despite its olde worlde setting this is a bright, modern gallery selling contemporary artworks mostly by North West artists. Its all good quality too, these guys know about art and will only display good but affordable original paintings and sculptures.

The proprietors, Ian Wilson runs his Interior and Construction Designer business from the premises and opens the gallery from Thursday to Sunday from 13.00 – 18.00.
Marilyn Castleton (pictured above outside the gallery) manages the gallery most days.

Our plan was to eat at the famous BoatHouse restaurant but it was closed for refurbishment so tried the Marsh Cat instead which was excellent. Followed by a brisk walk along the front before returning to the city. 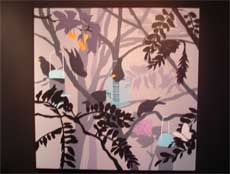 Register to Win Free Tickets on 20/08