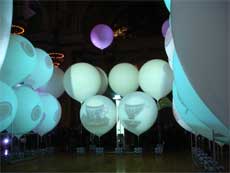 We were greeted by angels on the steps of St George’s Hall last night. They were very nice but also sad and very pale as they moved slowly in response to echoing sounds. No wonder they were miserable as later we saw them trapped in cell and stairwells around the hall. Probably has some symbolic meaning that went straight over my head.

We also discovered the Beatles locked up in a cell, Ringo was in a separate one for some reason. A sign said ‘Do not Feed The Beatles‘ . I think that has a double meaning too, there is very little reference to the fab four in the programme announced so far for 2008. The Beatles industry here continues to thrive and therefore doesn’t need any extra ‘food’ from the Culture Company, they can concentrate on other things.

So on arrival we entered the main hall, the central area had a sort of mini arena created by Stuart Bastik and Maddi Nicholson lining up over sixty eight-foot meteorological balloons anchored by bags of sugar. Brief details of the plans for 2008 were projected onto the balloons as well as onto plasma screens at each corner of the area. It looked rather good, certainly different and a lot better than the usual parade of speeches.

After a very brief introduction we were instructed to tour the building following different coloured routes according to the stickers we were given on entry. Apart from fallen angels and the Beatles we met various people role-playing historical scenes, dancers, musicians including the local Chinese youth orchestra and the small concert hall had been turned into a boudoir with Jayne Casey interviewing some of Liverpool’s cultural movers and shakers on the bed.

It was a good night I thought, well organised and a successful taster of things to come. The only negatives being (as we know from previous experience) the main hall cannot cope with sound systems and the food being served was not suitable for vegans. 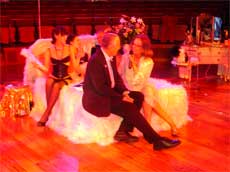 ‘A Breath of Fresh Art’ at JMU