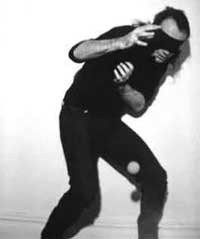 ‘Contemplating One’s Navel’, surely the phrase was invented for this guy. He is (or rather was) obsessed with the body. “I had to try out [try on] my body, test my body, find my body, use my body, day by day”. This was from the late 60s / early 70s and is a bit of its time really. So he filmed himself pulling all the hairs from around his navel till its completely bald. I don’t think that video is shown here but you can watch him burn the hairs from his chest with a candle or rub a live cockroach into the skin of his stomach. There’s also the infamous ‘Seedbed’ where he’s masturbating (all day for several days!) under the ramped floor of an art gallery.
All of Vito’s work starts with text so there’s masses of typed, printed or handwritten pieces on the walls as well as still photographs. The first things you see on the wall as you enter gallery 1 are some concrete poems.

All this bodily stuff is not really to my taste. I can see that in its day it was groundbreaking and challenging and influenced and inspired a lot of artists and performers so, if you have any interest in art history, you have to go and see it. But standing in a modern gallery watching this long black & white footage of an old wanker (literally and metaphorically) is really dull.

As you walk up the stairs to gallery 2 you see that Vito has moved onto more installation work using objects and sound rather than his body. I quite like the one of the long table which extends out of the window, thus becoming a sort of diving board.

From around 1980 he moves onto architecture. The Acconci studio was set up to create public art, furniture and mobile architecture. Now, this I like. Some of the studio’s very latest designs are on the walls outside gallery 2 and inside you can watch videos about some of the projects whilst ‘sitting’ in cool-looking but uncomfortable Vito-designed seats. I’m not sure that many of these projects ever actually get built but they stretch the imagination and have a sense of humour.

Of course, I could not resist calling into the Media Lounge to create some music on the Macs using samples of Vito’s voice and adding instrument tracks using Garageband software. Then copied to CD, great fun.

‘Collidoscope’ at Liverpool Academy of Arts

A Life Full of Holes