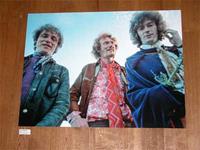 After returning to town from Urban Coffee on Thursday I went down to 3345 Parr St for the launch of Robert Whitaker’s exhibition of his photographs of Cream (that’s the ancient rock group not the dairy product). I’m sure I’ve seen most of these images over the years especially the one I’ve posted here. Sad to say, I used to dress like that and thought I looked cool!
This is another tie-in to the whole Summer of Love thing going on in the city at the moment. Whitaker has some of his photographs of others such as the Beatles in the Tate show. On Thursday there was a 60’s type light show going on and Alice in Wonderland was showing on the screen, Far out Man.
Look out for the one of Ginger Baker drinking his morning coffee after the night before, I guess we all look like that some days.
Ends July 31st.