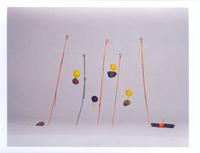 This is an exhibition of the pictures by the five winners of the Jerwood Photography Awards 2004. They are all aged under 30, each received an award of £2000 and had their work published in ‘Portfolio’.
My own favourites are Sarah Lynch’s ‘Suspended Realities’. One is pictured here. She uses wire, wooden splints and natural objects including fruit to create miniature sculptures then photographs them.
Emma Hamilton’s ‘Flores Carneus’ (Meat Flowers) are just that, flowers sculpted from animal organs! From a distance they look like vibrant still life paintings but I couldn’t look close up for too long.
Travis Hodges gives us more pictures of bored teenagers on the streets in a series called ‘Dead Time’ i.e. the time between dusk and sleep when there is little to do but loiter (apparently).
Leonie Purchas series ‘Escape in Israel’ was inspired by the fact that tourism to Israel increased during 2004. A mix of people in various places, secular, religious, urban, rural.
Lightboxes can sometimes be a pointless gimmick but I think Richard Page’s ‘Suburban Exposures’ works quite well. They give a strange atmosphere to these scenes of hidden suburbia.
At Open Eye until June 4th

Boudicca in my Kitchen

‘Collidoscope’ at Liverpool Academy of Arts