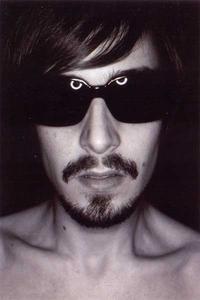 Liverpool seems to have been taken over by photographers lately. These portraits of mostly local musicians was launched last night with booze and live music at the Metropolitan Bar in Berry Street. A noisy crowded bar is not the best place to view artwork but it looks pretty good, there’s a large black & white photo of Annie (Norwegian pop star) and interesting pictures of Ladytron and Goldie Lookin’ Chain. Pictured here (c. Mark McNulty) is Pop Levi who also performed on the night. Mark McNulty also edits the Plastic Rhino magazine which features his pictures. I don’t think there’s an end date set for the exhibition yet.

Yet more portrait photographs. These are in a new exhibition at the Walker by Terry O’Neill who has been taking pictures of celebrities for about 40 years. He had no formal training, it just happened that his first job was as a photographic technician with British Airways, learnt on the job and happened to be in the right place at the right time to capture some scenes that caught peoples attention.

What I like about these is that Terry is in control of the shoot, he tells the celebrities how he wants the picture to look. So we have Eric Clapton in a field rather than sitting in his mansion, Rod Stewart being snogged by a horse and Derek Jarmen dipping his toes in the surf near his beachside home. Other subjects include Bette Davis, Faye Dunaway, Frank Sinatra, Paul Newman, The Beatles, Woody Allen and Mia Farrow etc.

‘The glamorous exhibition consists of forty-three stunning portraits of the most famous faces from the last four decades and reflects O’Neill’s long and varied career. The photographs include musicians, models, royalty and an array of Hollywood stars new and old.’

Pictured here (c. Terry O’Neill) is David Bowie with some horrible beast.
Runs from May 21st to September 11th. I believe Terry will be giving a talk sometime but I don’t have full details yet.

Russian Icons in the Modern World