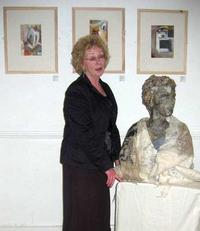 Strange title for this exhibition at Urban Coffee in Smithdown Rd. There is a statement on the wall but I neglected to digest it, I was in too much of a hurry to digest my coffee and flapjack. If I’d made it to the viewing last Friday I’d know all about it and I could have told you if the bust of Boudicca shown in the photo here is entirely made of felt. Its certainly partly felt as is quite a bit of Penny Gill’s artwork, some of it sculpted, some framed and some as long wall hangings.
Anyway, the title obviously refers to Queen Boudicca (didn’t we used to call her Boadicea or some such?) and women being strong, even in the kitchen hence the kitchen related paintings – not felt this time, some oil(?) on canvas.
Other artists on display: Rosamund Smears, Jazamin Sinclair and Lis Edgar.
Thanks to the L.Issue curator Lis Edgar for the photograph of Penny Gill at the private viewing with her bust of Boudicca and some of her paintings.
Update:
I forgot to mention the cabinet full off handmade pottery by Alejandra Castro.
And I now have a copy of Penny’s statement re the title…
‘Its a commonplace tale; one of injustice, exploitation, greed and brutality. The Celtic Queen Boudicca took a ferocious revenge against the Roman Empire in A.D.60. And if time travel were possible she would be most welcome to sanctuary in my kitchen…
During the 1960s Judy Chicago commissioned other artists to create a formal dinner party table, with named place settings to honour women of spirit throughout history. illustrious and overwhelming company.
So I’ve selected to entertain one woman. whose spirit of resistance and courage I respect. I’d like to think Boudicca could take off her crown, lay aside her battle axe and put her feet up with a cup of tea laced with whisky…’