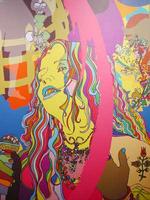 Felt like I’d travelled back in time today. This is all very 60s psychedelic. Every inch of wall (and door!) is covered in colourful designs and some are projected onto the floor while several huge screens show about 17 hours worth of old video footage of people with big hair disco dancing or doing there thang. Cool! Who needs LSD when you can sit in the middle of this room with the headphones on and blow your mind. Dig out your tie-dye T shirts and loons and get along there man.

Tate Liverpool has commissioned an exciting new work to complement the special exhibition Summer of Love: Art of the Psychedelic Era (which opens on 27 May 2005). assume vivid astro focus is both the pseudonym of a New York-based Brazilian artist, who prefers to remain anonymous, and the title given to the artist’s wide-ranging aesthetic project. In the past this has encompassed a broad range of different media, including video projections, wallpaper, T-shirts, tattoos, large scale installations and, at times, collaborations with other artists. assume vivid astro focus has shown at the Whitney Biennial, 2004 and Frieze Art Fair, 2004.

Another trip to Manchester

Atkinson at the Atkinson

Richard Wentworth at the Tate